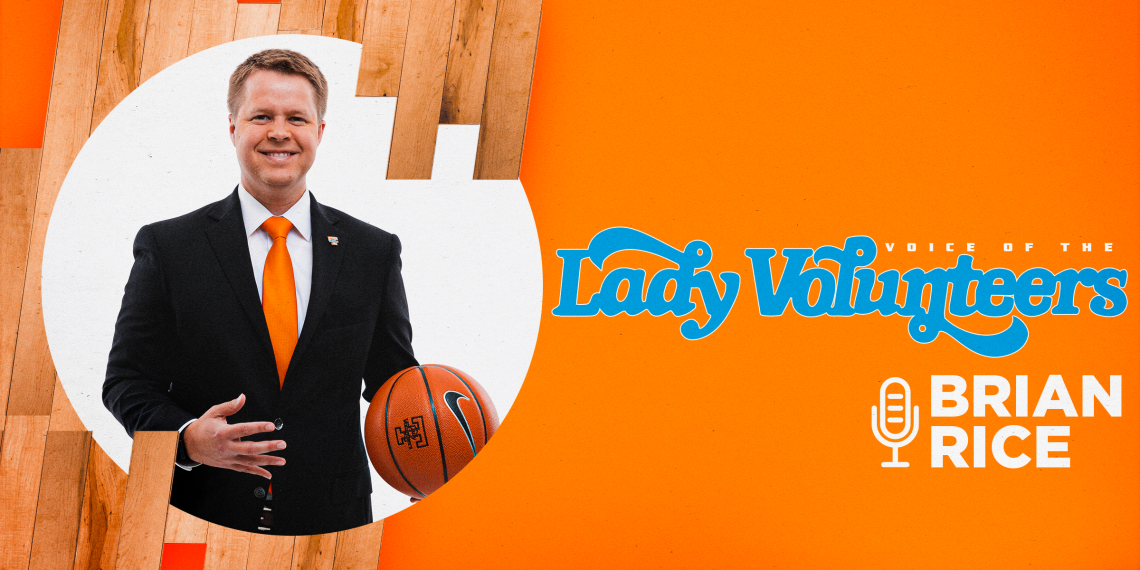 Rice Gets Call As Voice Of Lady Vol Basketball

Brian Rice, an award-winning sports talk show host and broadcaster with 10 years of experience as the highly-respected radio play-by-play announcer for Lady Vol softball, was announced Tuesday as the new voice of Lady Vol basketball.

Rice, a Knoxville native who became a Big Orange fan-favorite behind the microphone at softball games and served as a fill-in for Mickey Dearstone on two UT women’s hoops broadcasts in 2020, will handle radio play-by-play duties and host The Kellie Harper TV Show. He also will assist with other related duties in promoting the winningest program in women’s college basketball history, which enters the 2022-23 campaign ranked No. 4 nationally in ESPN’s “Way-Too-Early” Top 25.

“All of us in the Lady Vol program extend a warm welcome to Brian and look forward to working alongside him,” Tennessee Women’s Basketball Head Coach Kellie Harper said. “He is so passionate about the university and the athletics department, and his combination of love and respect for Lady Vol basketball is abundantly clear. Brian built his broadcast reputation calling Lady Vol Softball and other events, and I look forward to him utilizing his talents, experience and platform to share Lady Vol basketball’s story as well.”

Becoming the third person to hold the role on a full-time basis, Rice joins the Lady Vol Network after Dearstone announced his retirement in the spring of 2022 following 23 seasons of painting a picture on the air for Big Orange followers. Current Tennessee Director of Broadcasting Bob Kesling was behind the mic at Lady Vol games for more than two decades after the legendary John Ward began the tradition by calling select UT women’s games in 1977-78.

“Brian has done a fantastic job on the radio with Tennessee softball for many years and filling in for Mickey on some Lady Vols basketball games in the past,” Vol Network General Manager Steve Early said. “His background, experience and knowledge has uniquely prepared him for this very prestigious next role, and it is very apparent how much devotion and passion he has for the University of Tennessee and Lady Vols basketball.”

Rice began calling Tennessee softball games in 2013 and has filled in for other broadcasts as well as handled public address duties for women’s basketball over the years. He also has called play-by-play for Tennessee baseball, soccer and volleyball for UTSports.com and SEC Network+.

“Brian Rice is one of the best in the business,” Tennessee Softball Head Coach Karen Weekly said. “He is most deserving of this opportunity, and I can’t think of anyone better or more prepared to be the next voice of Lady Vol basketball.”

In addition to his play-by-play work, Rice is a well-known on-air personality in Knoxville, serving as the co-host of The Erik Ainge Show that originates on the flagship station of the Lady Vol Network, 99.1 FM/AM 990. Rice was named the Knoxville News Sentinel Knox Stars Best of Knoxville in the Favorite Local Radio Personality category in 2020 and 2021. He also hosted a nightly sports television program simulcast on FOX 43 TV and 99.1 FM that covered local stories as well as the biggest national headlines.

From 2014-16 Rice was employed by the University of Tennessee, filling a role as a writer and broadcaster for the athletics department within the media relations office. He served as a writer/content creator for UTSports.com, producing features, blog posts, recaps, columns and historical reflections. He also handled soccer, volleyball, basketball, baseball, softball and tennis broadcasts as assigned by UT prior to the launch of the SEC Network+.

“Serving as the voice of Lady Vol basketball is an important role in support of one of the most storied programs in college sports,” Tennessee Vice Chancellor/Director of Athletics Danny White said. “As fans who have followed Tennessee softball in recent years can attest, Brian is well prepared for this unique opportunity. As a UT alum and lifelong fan, Brian is well versed in the history and tradition of the program and is passionate about sharing its stories from the past, present and future.”

A two-time UT graduate, Rice possesses a degree in sport management in 2005 and a master’s in sport studies in 2007. The graduate of Knoxville Catholic High School cut his teeth serving as a P.A. announcer at Fighting Irish sporting events.

“I am honored to be chosen to represent the most powerful brand in women’s college athletics in Tennessee Lady Vol basketball,” Rice said. “I am incredibly excited to get started and share the stories of our student-athletes while painting a picture of the action for our loyal fans on the Lady Vol Radio Network.

“The list of names that have called games for this program represents an elite group that I am humbled to be given the opportunity to be a part of. Lady Vol basketball has been broadcast by legends of the business as well as heroes of mine and every other Tennessee fan that grew up listening across the state and around the world.”

The Lady Vol Radio Network is one of the largest collegiate women’s basketball radio networks in the country and one of the first radio networks to build an expansive affiliate list which includes The Rooster 101.5 here in Southern Middle Tennessee.

No Bomb Found after Threat made against Tullahoma High School