According to Sam Shamburger with the National Weather Service reported to On Target News that a “microburst” of wind measuring half mile long by 250 yards wide struck in an area along Interstate Drive from around Monogard Dr. to Highway 55.

The NWS report indicates a wind speed of 75mph hit Raider Academy on Hwy 55 that tore off a portion of roof above the gym.

Wind speed increased to 85mph as the microburst hit Interstate Dr. A large section of sheet metal was ripped off the roof of the Coffee Farmers Co-op. The BP Station on the corner McMinnville Hwy and Interstate Dr received structure damage. A home lost a larger portion of its roof and a front porch column.  The covering on a dugout at the Westwood Middle School’s softball field was torn off. Trees were reported down on Woodland, Oakdale, South Spring streets. Trees were also down in Dave King Park, plus a tree fell on a pickup truck in Manchester Recreation Center parking lot. Other areas also reported damage from last week’s storm. 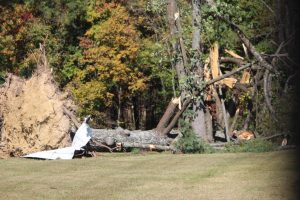 At one time over several thousand Duck River Electric Co-op customers were without power in Coffee County.

All photos by Barry West