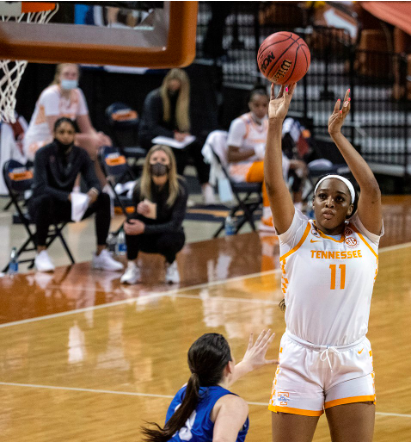 The No. three seeded Tennessee Lady Vols Basketball team held MTSU 39-39 in the first half en route to a 87-62 blowout victory in the first round of the NCAA March Madness Tournament on Sunday afternoon at the Frank Erwin Center.

The Lady Vols battled hard in a shaky first half against the Blue Raiders but thanks to a tenacious defense the in the second half Tennessee began to cruise. The Lady Vols played aggressive and continued to extend their lead and end the contest on top.

Tennessee Lady Vols will now advance to the second round of the NCAA March Madness and take on the Wolverines of Michigan with tip-off set for 4pm.

You can hear the Lady Vols play live on the Rooster 101.5 with pregame coverage to begin at 3:30pm.