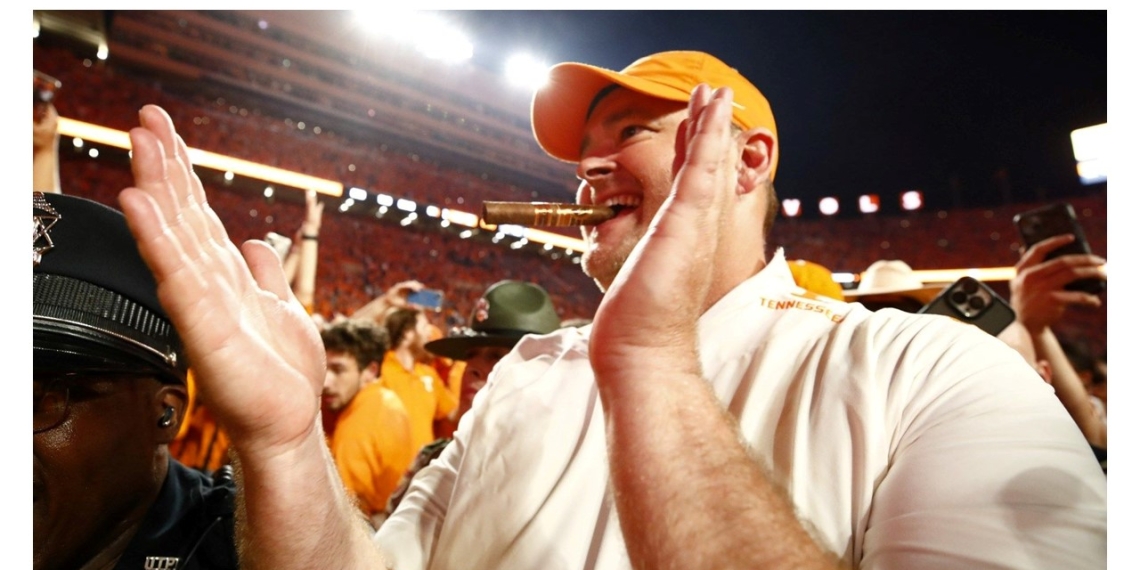 Vols Light Up the Scoreboard and Cigars in Win over Alabama

Redshirt senior Chase McGrath kicked a 40-yard field goal as time expired to deliver No. 6/8 Tennessee an epic 52-49 victory over No. 3/1 Alabama in front of a capacity orange-out crowd of 101,915 at Neyland Stadium on a Tennessee Saturday night.

The Vols, who scored their most points ever in the 105-game series, improved to 6-0 overall and 3-0 in the SEC, securing their first triumph over the Crimson Tide since 2006. In surrendering the most points since giving up 54 to Sewanee in 1907, UA fell to 6-1 overall and 3-1 in league play.

Also of note, Tennessee has defeated four ranked teams for the first time in a regular season since 1998. That year, it took care of No. 17 Syracuse, No. 2 Florida, No. 7 Georgia and No. 10 Arkansas.

UT started its game-winning possession at its own 32 with 15 seconds left in the contest, and it seemed overtime was in the offing. With completions of 18 and 27 yards to senior Ramel Keyton and redshirt junior Bru McCoy, respectively, redshirt senior quarterback Hendon Hooker moved the Big Orange down the field expeditiously into field goal range and opened the door for a possible victory in regulation.

McGrath, who missed his first PAT in 98 attempts as a Vol earlier in the contest, came through in the clutch with the hopeful weight of Tennessee fans everywhere on his shoulders. As his kick cleared the crossbar, Big Orange waves of fans spilled out of the stands and covered Shields-Watkins Field as the strains of Rocky Top and Dixieland Delight provided a musical soundtrack to the joyous celebration that included the taking down of both goal posts.

In the win, junior wide receiver Jalin Hyatt enjoyed a school-record day, carding five receiving touchdowns. His scoring catches of 36, 11, 60, 78 and 13 yards enabled him to finish the day with a career-high 207 yards on six receptions. His five TDs in a single game also tied a program best that was established by Gene McEver on Dec. 7, 1929 vs. South Carolina.

Hooker turned in a 21-of-30 effort for a career high of 385 yards passing and a career-best-tying five scores. The Vol signal-caller also extended his streak of games with at least one touchdown pass to 18, tying Heath Shuler (10/17/92 to 1/1/94) for the school record.

After winning the pregame coin toss and deferring to the second half, Tennessee kicked off to the Crimson Tide. The Big Orange defense allowed one first down on the game-opening drive before forcing a punt that junior Dee Williams returned to the Vol 44.

Hooker quickly led UT down the field, connecting with McCoy and redshirt senior tight end Jacob Warren for passes of 11 and 12 yards, respectively, and carrying the ball himself for 20 yards to help set up junior running back Jabari Small for a one-yard touchdown plunge. McGrath’s point-after-touchdown kick made it 7-0 Tennessee with 10:18 to go in the opening stanza following the seven-play, 56-yard drive that required only one minute and 58 seconds.

Alabama needed just over two minutes to answer. Marching 71 yards in eight plays, the Crimson Tide capped the drive when running back Jahmyr Gibbs bounced outside around left end to score on an eight-yard run. Will Reichard’s point-after evened the score at seven with 7:59 to go in the first quarter.

The tie didn’t last long, as the Vols needed only five plays and 1:16 off the clock to retake the lead. After a third-and-eight pass interference infraction resulted in a 15-yard march-off and UT first down, the Vols got an 11-yard reception from Keyton and an 11-yard rush from sophomore running back Jaylen Wright before Hooker found a wide-open Hyatt streaking down the left seam for a 36-yard touchdown pass. McGrath’s PAT made it 14-7 Vols with 6:43 remaining in the first period.

Tennessee struck again less than three minutes later after forcing a short Bama punt. On play number four of a drive that started on the UA 35, the speedy Hyatt ran an underneath route that he snared in stride, racing 11 yards and slipping past Crimson Tide defenders to ease just inside the right pylon. McGrath was good on the PAT, and the home team’s lead grew to 21-7 with 3:59 still left in the first.

Alabama put points on the board on its next possession, but the Vol defense was able to keep the Tide out of the end zone. Bama settled for a 21-yard Reichard field goal that trimmed UT’s lead to 21-10 with 14:07 left in the second quarter.

UA finally forced Tennessee to punt early in the second frame, but Quandarrius Robinson tried to corral the ball and surrendered possession to UT sophomore Christian Charles. After a 31-yard Hooker to Keyton connection to the nine, tight end Princeton Fant lined up in the fullback spot two plays later and bulled his way into the end zone for a two-yard score. McGrath booted the extra point to make it 28-10 Vols with 11:41 to go in the second period.

Alabama navigated 84 yards to cut into Tennessee’s lead again with 6:46 left in the first half. Junior quarterback Bryce Young found a diving Ja’Corey Brooks for a seven-yard touchdown reception that capped a 10-play drive. Reichard nailed the PAT to make it 28-17.

After coming up with a stop on a fourth-and-six attempt by Tennessee at the Alabama 35, the Crimson Tide managed to work its way into another scoring opportunity. After UT’s defense stiffened, however, UA settled for a 43-yard Reichard field goal that made it 28-20 Vols with 36 seconds to go in the half.

Following a failed fourth-down conversion attempt by the Vols at the Alabama 41, the Crimson Tide turned that stop into points in just three snaps. A 26-yard Gibbs touchdown run and a two-point conversion pass from Young to Brooks knotted the score at 28 with 11:11 remaining in the third quarter.

Tennessee answered in less than a minute. After Small carried 12 yards for a first down on the drive’s second play, the Vols went deep on the next one. Hyatt separated from his defender and Hooker delivered a perfect ball for a 60-yard strike. McGrath’s PAT was off the mark, leaving UT with a 34-28 edge with 10:16 to go in the third frame.

Alabama countered with a 12-play, 75-yard drive to take its first lead. Gibbs hit pay-dirt for the third time on the day, carrying it in from a yard out. Reichard’s kick made it 35-34 Crimson Tide with 4:27 showing on the clock in the third.

After being pinned at their own six on a punt by Alabama, the Vols were undeterred. It took just three plays to ring up go-ahead points, culminated by another Hooker to Hyatt bomb. This time, the duo linked up for a 78-yard touchdown, and Hooker hit Fant for a two-point conversion to push Tennessee back into the lead by seven, 42-35, with 14:01 to go in the final period.

Alabama came right back, tying up the game at 42 with 8:38 left in the game. Young found tight end Cameron Latu for a one-yard scoring toss, and Reichard knocked home the extra point.

A penalty on the ensuing kickoff return once again left UT with starting field position at its own five. On third and three, a bad handoff exchange resulted in a fumble, and the Tide’s Dallas Turner was there to pick it up and carry it into the end zone. Reichard’s kick put Bama back on top, 49-42, with 7:49 remaining.

After an interception appeared to end a potential game-tying Vols’ drive, a pass inference penalty on Alabama gave the Big Orange new life. On the very next play, Hooker fired a laser to a slanting Hyatt for the duo’s fifth scoring connection of the contest. McGrath’s PAT evened the scored at 49 with 3:26 left in the game.

Alabama’s Reichard had a chance to hit a go-ahead field goal with 15 seconds to go, but the Tide kicker missed wide right. That opened the door for the game-winning drive for the Vols.

A first down toss of 18 yards from Hooker to Keyton moved the ball to the 50.  Hooker then found a leaping McCoy across the middle for a 27-yard gain to the Alabama 23 with two seconds remaining. With the stage set, McGrath came on and sent the crowd into a field-rushing frenzy with a 40-yard game-ender.

The Vols are back at Neyland Stadium next Saturday, as they host the UT Homecoming Game at noon against UT Martin. SEC Network will have the broadcast.

Story and picture by utsports.com