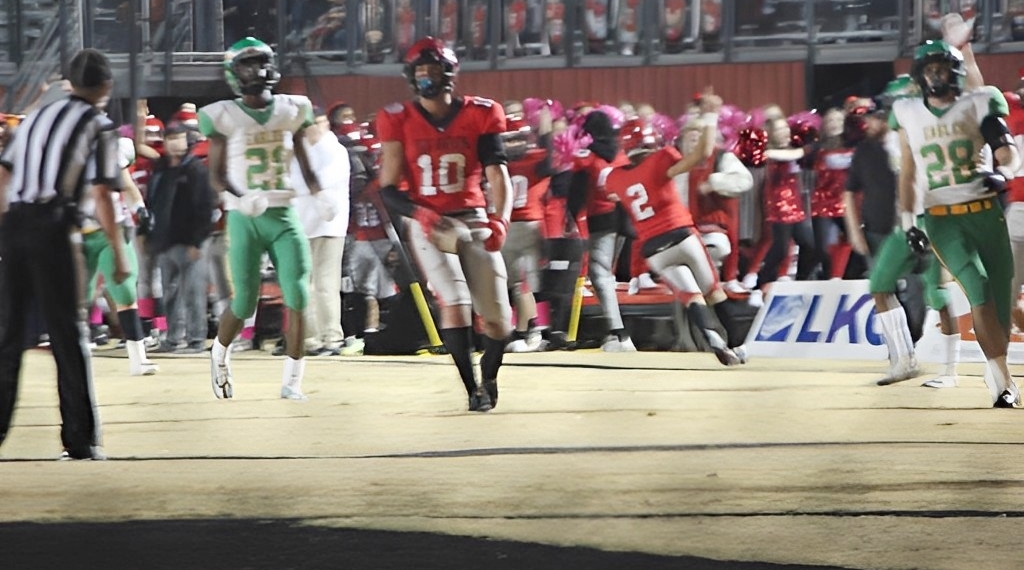 First Time since 1981 Raiders Win 8th game in a season

Not since 1981 has a Coffee County football team won 8 games in a season. On Friday night the Red Raiders won their 8th in the 2022 season with a 35-0 shutout of Rhea County.

It all started at the 6:19 mark of the 1st quarter when Quarterback Cole Pippenger weaved his way through the Eagle defense for a 27-yard touchdown run. “Pipp” was not done as he connected Jahlin Osbourne on a 14-yard TD pass with 11:19 to go in the 2nd to make it 14-0. Later, with 6:33 remaining in the half it was Pippenger again, this time on a 10-yard run behind the outstanding blocking from the offensive line and it was 21-0. Konor Heaton would finish off the scoring in the first half with a 10-yard rush into the end zone with 3:14 remaining. The Red Raider led 28-0 at the halftime break.

The only score in the second half occurred when Heaton powered the ball in from 1-yard out to up the score to 35-0 with 6:12 to go in the 3rd. The mercy-rule was then enforced, and Coffee County went with mostly substitutes for the rest of the game.

The defensive game plan worked to perfection for the Raiders as they only allowed Rhea County 152 yards on the night.

Pippenger was also perfect on the night as he was 15-for15 passing for 223 yards and he added 46 rushing.

Senior TE Jahlin Osbourne caught 6 passes for 108 yards and Ian Weldon had 4 for 58.

Everyone is invited to a community pep rally at the downtown square from 6-8:30 p.m. Thursday, Nov. 3 prior to the playoff game on Friday. Coffee County (8-2) will host Stewarts Creek (5-5) starting at 7 p.m.